The Divine Beers of Chimay


This blog post was done as an introduction to the history and beers of Chimay for attendees at the BEER NOW bloggers/writers conference that was held in June of 2019 in Montana... 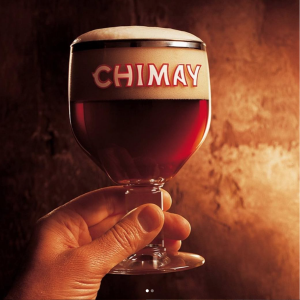 Photos courtesy @bieresdechimay (Instagram)
Father Theodore sat at his microscope in the brewing laboratory of Belgium’s Abbaye Notre-Dame de Scourmont in the winter of 1948. The Trappist monk was searching for a new yeast strain for the abbey’s Chimay beers. How did a monk become so knowledgeable of microbiology and brewing chemistry? The clever, spunky Father Theodore had studied with renowned brewing researcher Jean De Clerck (who is now buried at Scourmont Abbey), and the late beer writer Michael Jackson once said, “Father Theodore had a brewing scientist’s knowledge of water, barley varieties, hops and yeast.”

Over a period of two years, Father Theodore propagated different brewing yeasts from single cells and conducted fermentation and sensory tests in search of an alcohol-tolerant strain that would provide the perfect aroma, flavor and flocculation for Chimay. The iconic monk described the process as “…painstaking work, requiring Benedictine patience.” Father Theodore passed away in 2013 at the abbey, but all Chimay yeast remains cultured from the single yeast cell he chose in the 1940s. What brewer could ask for a more fitting legacy?
Trappist brewing began in 1098 when a group of French monks decided that their way of life had become a bit over-elaborate. It was proposed that the Cistercian monks (also known these days as “Trappists”) should return to the rule of St. Benedict that stresses a life of simplicity, charity and humble service to God, with the monks living from their own works. This reform quickly caught on throughout Europe, and in the summer of 1850 a small group of monks from St. Sixtus Abbey in Westvleteren traveled to the Scourmont plateau near of the town of Chimay in southern Belgium to create the Abbaye Notre-Dame de Scourmont. The monks brought along a zeal for brewing and began Scourmont’s Benedictine traditions of making its own beer, bread, butter and cheese.
Monks oversee the production of Chimay cheese and beer that is carried out by skilled employees, and a substantial slice of the profits go to charities. Only products produced within the walls of a Cistercian abbey can carry the protected Trappist logo, and Chimay was the first to use the appellation “Trappist Beer.”
The monks focus on quality and efficiency. The water for Scourmont’s Chimay beers comes from a well dug 45 meters beneath the monastery, and spent grain husks from the brewing process are fed to the cows that produce the milk for Chimay cheese. Brewing yeast is harvested and re-propagated for the next batch of ale, and the monks carry out quality control in the abbey’s own laboratory. The brothers embrace a devotion to God and science, and also take a vow of silence, only speaking when praying, worshipping or talking about their work. The monks thought that a noisy bottling line would detract from their devotion to quiet and tranquility, so Chimay’s beers are hauled away from the abbey brewery in large tanker trucks and bottled at a nearby facility.

1862 saw Scourmont begin production of the first Trappist beer to be released to an appreciative public. At 7% alcohol by volume (ABV), Chimay Première (Red) ranks as a world-class example of the Trappist style of beer called Dubbel. Copper/brown in color with ruby highlights, the beer is brewed with rich Belgian malts, dark candi sugar and spicy, floral hops. Expect aromas and flavors of raisins, figs, caramel, light chocolate and mild clove in this malt-focused brew. All the Chimay beers are available in 33 cl capped bottles and 75 cl and 150 cl corked versions, with some brands also packaged in larger, distinctive bottles for special occasions.
Chimay Cinq Cents is an example of a Belgian Trappist Tripel with a pale orange tint, 8% ABV, clear candi sugar and bittering hops that lead to a somewhat dry, spicy finish. Look for complexity from fruity esters, alcohol warmth and grain notes reminiscent of honey. Cinq Cents achieves a delicate balance of malt sweetness, fermentation complexity and moderate hop bitterness that pairs extremely well with fish, roast chicken, spring salads and the abbey’s own Vieux Chimay aged cheese. Cinq Cents was first brewed in 1966.
Chimay’s most illustrious and robust ale must be the powerful Chimay Grande Réserve – also known as Chimay Blue because of the blue cap on the 33 cl bottles. Some refer to the style as Belgian Quad, with Belgian Dark Strong Ale being the more descriptive term. The ale pours with a thick, creamy, tan foam and dark brown color. Candied fruit, ripe cherries, prunes, toffee, spice, clove, peppery alcohol, dark malts and mild hop notes highlight the nose and palate of this 9% ABV brew that will evolve and develop over a few years of cellaring. Despite the huge malt profile, Grande Réserve never finishes heavy or syrupy – only dangerously delicious. Sip it alongside a bite of A La Chimay Première cheese that has its rind washed in Chimay ale during maturation. Grand Réserve was born in 1956 as a Christmas beer and went into mass production in 1982. Exceptional bottles of a boozy, barrel-aged version are available on occasion.
The monks of Scourmont only indulge in their strong ales during special occasions, with a lighter alcohol brew being available with daily dinner. The best way to experience the monk’s pale table brew, also known as patersbier, is to journey to the Espace Chimay inn, visitors center, shop and restaurant located just down the road from the abbey. The 4.8% ABV brew is labeled Chimay Dorée (Gold), and the mild, elegant beer boasts surprising notes of esters, citrus, hops, spice, honey, biscuit crust and apricot – all backed by a soft, grainy-sweet malt character. The beer goes well with a goat cheese salad or scallops sautéed in butter and garlic. Chimay Gold was first released to the public in 2013.
Chimay ales are bottled-conditioned, meaning that no artificial carbon dioxide gas is used for carbonation. Rather, the beers are bottled with a hint of residual sugar and live yeast, allowing the yeast to produce a lively, natural sparkle within the bottle before settling into a fine sediment. The beers of Chimay now enjoy an expansive distribution throughout a multitude of countries, and the yeast sediment in the bottles absorbs oxygen, actually reducing oxidation and helping the beer fare well on long journeys around the world. Pour a Chimay slowly into an appropriate goblet or tulip-shaped glass, being careful to leave the sediment in the bottle. The yeast sediment is not harmful to consume and does contains beneficial nutrients, but it will change the flavor of the beer.
Michael Jackson’s early beer writings in the 1970s and ’80s did much to introduce the world to the ales of Chimay, and many older craft beer enthusiasts will say that Chimay was their first taste of Belgian beer. Hefty and rich enough to sometimes help fasting monks endure Lent, the Trappist ales were often described by Michael Jackson as “not a beer to refresh the body, but to sustain the soul.”
Facebook: @chimay
Twitter: @EspaceChimay
Instagram: @bieresdechimay
Posted by Brewtopia LLC at 4:12 PM No comments: