Even though the festival went on without a hitch, fear of icy roads forced us to cancel our traditional early morning expert judging panel at ACAT this year. The winners below are based solely on votes by attendees for their favorite cask of the day. The casks this year were absolutely jaw-dropping, and every beer received votes... 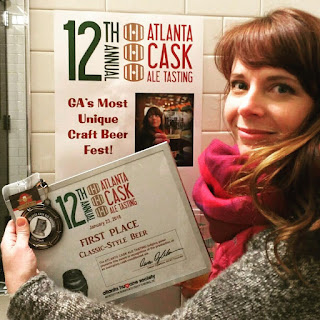 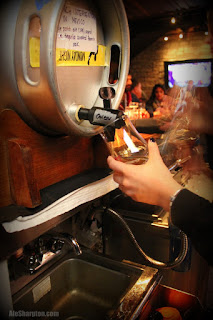 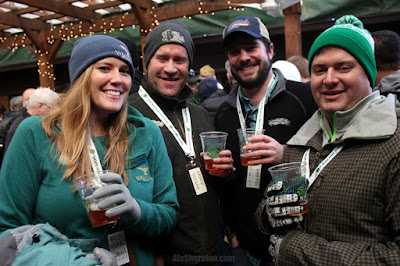 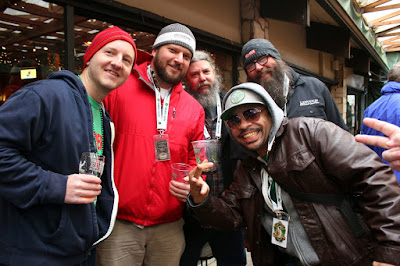 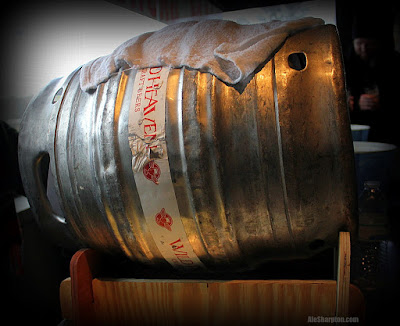 Photos with watermark are courtesy of Ale Sharpton of www.AleSharpton.com.

The UK's Craft vs. Cask Debate Rages... Sort of

Two of the 1000+ volunteers at the Great British Beer Fest.
The UK's Craft vs. Cask Debate Rages... Sort ofBy Owen Ogletree Two blokes walk into a crowded London pub. The gray one with a beard and belly heads to the bar for a pint of traditional cask ale made in an upstart nano-brewery. The bearded hipster in skinny jeans goes straight to the pub's draft taps that offer a range of kegged ales and lagers from London's hottest new craft breweries. With every sip, the two exchange judgmental glances, each being certain that his pint ranks as the greatest beer in the country. What's the difference between cask and keg? Unfiltered, unpasteurized cask ale contains yeast that carries out a slight secondary fermentation in the serving vessel, providing a subtle, soft, natural carbonation. Casks are allowed to settle in cool pub cellars at 50-55 degrees F, and bartenders "suction" the cellared cask ale to the bar using conventional hand-pump taps with no external gas pressure. Conversely, filtered, pasteurized kegged beer contains much higher levels of carbonation, and pressure from artificial gas forces the beer through standard draft taps.

Traditional cask brewers are now turning out crafty new brands.
In a controversy unique to the UK, many see traditional cask-conditioned ale (a.k.a. "real ale") as under threat by new-fangled, American-inspired kegged craft options. The Campaign for Real Ale (CAMRA), Europe's most successful consumer protection group, started in 1971 as a grassroots protest against the UK's bland, lifeless kegged beers of the day, and some of CAMRA's current 160,000 members still consider any kegged beer as an evil, over-carbonated enemy. Each August, CAMRA organizes London's Great British Beer Festival (GBBF) that's attended by more than 55,000 thirsty real ale lovers. 1,000 volunteers pour over 900 different beers and ciders in London's Victorian-era Olympia exhibition center. All British beers at the GBBF are cask or bottle-conditioned - kegs are only allowed for a few special, foreign beers. Disgruntled UK craft keg beer producers - like Scotland's BrewDog - have protested this rule.

London's Camden Town Brewery specializes in craft lagers.
Enter a group of young craft beer lovers who came together in 2013 to start the annual London Craft Beer Festival (LCBF) during the same week as GBBF. With modern, kegged craft beers from the UK and Europe, obscure music, a locale loaded with industrial chic, and beers being served mostly by the brewers, the smaller LCBF caters to a contemporary crowd. "Unlike the Great British Beer Festival, the London Craft Beer Festival is actually great, rather than just calling itself great," says LCBF founder Daniel Sylvester. "The two events happen during London Beer Week, and we thought people should come to both and see the difference. Our craft beer scene is being driven by amazingly talented UK brewers who are inspired by craft beers from around the world and supported by young, multi-gender craft beer lovers. We found the GBBF's lack of interest in this thriving scene the perfect antagonist for our festival."

Roger Protz, editor of CAMRA's popular Good Beer Guide, believes that the GBBF does a fine job in showcasing cask ale creativity. "Years ago, there were just two basic styles of beer in the country - mild and bitter," he notes. "Now, walk around the GBBF and you'll see casks of hoppy golden ales, beers aged in whisky and wine barrels, beers made with chocolate and coffee - just like in the states, the UK now produces an incredible range of interesting beers." UK beer writer Pete Brown believes a big misconception among many in the UK is that cask and craft are somehow separate. "For many, 'craft' is synonymous with 'craft keg' - but that's nonsense," says Brown. "Cask ale is the epitome of craft beer, and, despite all the noise around craft keg, craft cask is by far the fastest growing format of craft beer in the UK. Craft keg shows us that format is not everything, and that quality and flavor are not determined by the type of container. I think both will continue to thrive."

The popular Thornbridge booth at the London Craft Beer Fest.
Alex Buchanan, marketing manager for Thornbridge Brewery, sees no point in arguing about beer. He points out, "Extraordinary beer can come from a brewery that's been going for 150 years and only producing cask beer, or it can come from a brewery that's 15-weeks-old and producing fantastic keg beer. Consumers will be the judge." CAMRA continues to focus on promoting cask ale, but Roger Protz sees plenty of room for craft keg in the UK. "Variety is important, and some UK bars and restaurants are simply not equipped to handle the challenges of cellaring, caring for and serving cask ale," he says. "Craft keg is ideal for these places, and most modern craft keg beers are good, unlike the dreadful, flavorless beers of the '70s." Peter Jackson, owner/brewer of London's Southwark Brewing Company, remains optimistic that cask ale and craft keg will find an amiable equilibrium. "I think cask and craft keg producers should be happy that both formats are encouraging people to try new beers. It's an exciting time in the UK, and there hasn't been anything like it for 50 years."

Head brewer John Dreibergen (left) and founder Dan Lowe of London's fledgling Fourpure Brewing.
The LCBF's Daniel Sylvester sees any equilibrium for cask and craft beer as being a long way off. He explains, "I was recently in a country pub in the middle of nowhere that had two craft beer bottle options, and the owners saw themselves as the most forward-thinking pub in the country. Big cities like London are taking the lead in craft beer, but the rest of the country will catch up eventually." One thing is certain: the UK's current craft beer craze has encouraged consumers to think about beer, talk about beer and focus on flavor. The vast majority of UK beer drinkers seem too content in enjoying their pints to be concerned with debate.

This article was published originally in Ale Street News.

Posted by Brewtopia LLC at 3:31 PM No comments: