First Published in All About Beer Magazine 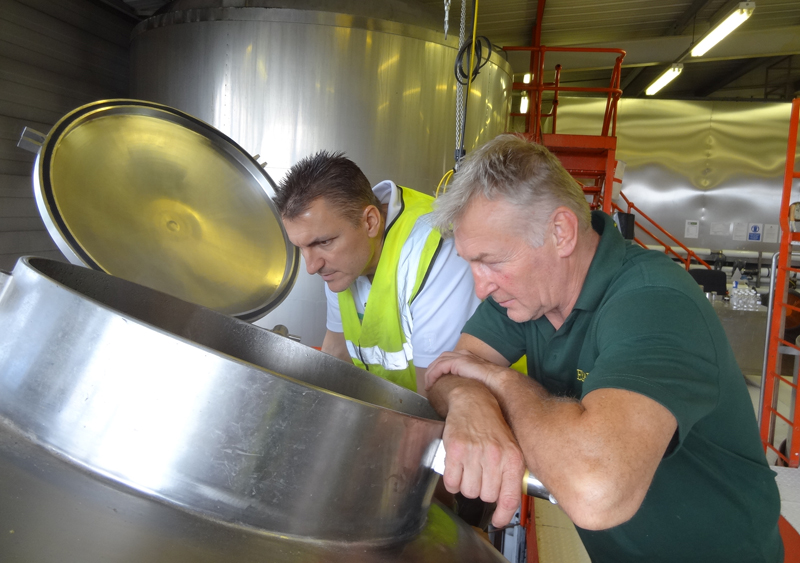 Located in the English town of Leicester, Everards cranks out a fine range of traditional British ales. Why was a brewer from Athens, GA, stressing out the Everards blokes last August by making a clone of Terrapin Rye Pale Ale on the Everards system? It was all part of an elaborate scheme by the United Kingdom’s immense chain of Wetherspoon pubs to bring over U.S. brewing celebrities to formulate cask clones of popular American beers at breweries around England.

Everards brewed seven batches of Terrapin’s award-winning Rye Pale Ale over three days, producing 1,750 cask firkins, with a couple of casks going to each of the 850 Wetherspoon pubs across England, Wales, Scotland and Northern Ireland. Cask ale (or “real ale”) is unfiltered beer containing no artificial carbon dioxide gas. A soft carbonation develops inside the cask from residual yeast and sugar, and, once tapped, the delicate ale must be consumed within a few days. This presented no problem with the Terrapin casks, as enthusiastic Wetherspoon patrons drained them all in a little over a week.

When asked why such an elaborate undertaking is worthwhile for Everards, Trevor explained, “Making a new recipe with a brewer from another country gives us valuable insight into techniques and ingredients for our specialty brews. It’s challenging at times—like with Spike’s rye malt—but worth it for the learning experience.” 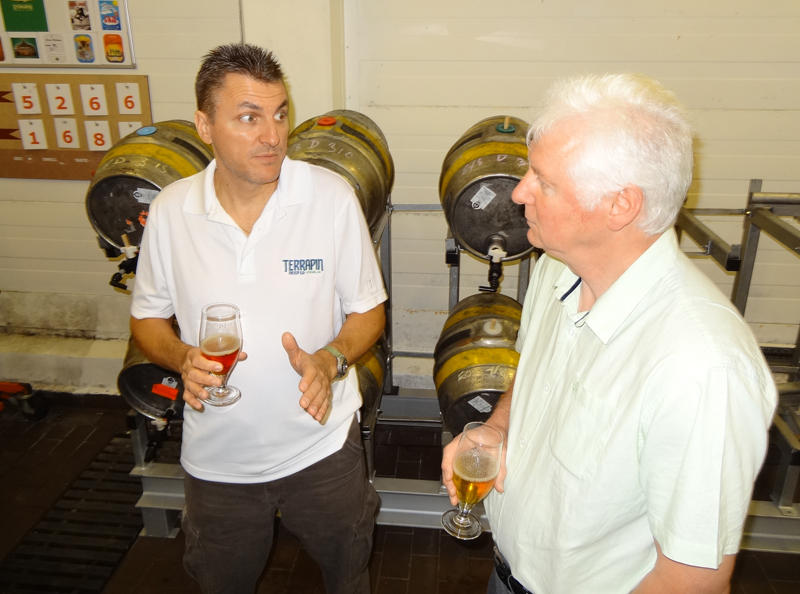 Terrapin’s Brian “Spike” Buckowski and Everards head brewer Graham Giblett discuss recipe and procedures for their Wetherspoon collaboration. Photo by Owen Ogletree.
Wetherspoon pubs pride themselves in stocking an impressive array of interesting cask ales from around the United Kingdom, and the chain also seems deeply interested in bringing a touch of popular American beer flare and creativity to its cask taps. There’s a bit of head-butting going on now in the United Kingdom between traditional cask ale enthusiasts and younger beer geeks, and Wetherspoon wants to bridge this gap with its international guest brewer program—illustrating that great cask ale and attention-grabbing beer can be “one and the same.”

“U.K. microbreweries seem to be heavily influenced by what U.S. brewers are doing these days, and often try to mimic their beer styles,” notes Everards head brewer Graham Giblett. “The Wetherspoon collaboration program could have a very significant influence on the type of cask beers produced in the U.K. in the future.”

Wetherspoon’s original idea in 2008 was to invite international brewers to create beers in the United Kingdom for the pub chain’s beer festivals held twice every year. “This was considered far more environmentally friendly than shipping thousands of gallons of beer across the world,” noted Wetherspoon spokesman Eddie Gershon. “It also served as a good way of enabling international brewers to showcase their beers in the United Kingdom, whilst still supporting the British brewing industry.”

Wetherspoon pub managers loved the buzz that the collaborations generated with customers. By 2013, the enormous popularity of the collaborative ales justified extending the program beyond the festivals and making the distinctive casks on a regular basis. “Consequently, the Wetherspoon American Craft Brewers’ Showcase was developed, and from September of 2013 we’ve had an American brewer visit the U.K. every two weeks to brew for us,” Gershon added.

Stone Brewing Co.’s Mitch Steele served as one of the first international participants back in 2008, and his continued collaborations always prove enormously popular. His recent Wetherspoon creation, a Double IPA dry-hopped with Mosaic and Centennial hops, was brewed at Adnams Brewery in scenic Suffolk. Steele saw the beer as a big hit that probably made no money for Wetherspoon because of exaggerated U.K. beer taxes on higher alcohol brews. “It seems as though high ABV ales are sometimes frowned upon in England,” he noted. “In fact, there were even a few Wetherspoon pubs that refused to serve my Double IPA, because of the alcohol content.”

Steele recalls many people in the United Kingdom who still think of American standard lager as the only beer the United States has to offer. “Bringing over high-profile brewers and introducing people in the U.K. to the way we brew has been fun, and we’ve gotten great feedback on our beers. One of the funniest experiences was back in 2008 when we did the first American craft beer for Wetherspoon, and the IPA we brewed was actually the top-rated English beer on RateBeer for a while!”

Fat Head’s Brewery’s Matt Cole recently completed his third brew for Wetherspoon—Rocketman Red—an American-style amber ale that showcased an elegant caramel and toasted malt character balanced by an American hop finish. “I brewed at Wadworth Brewery in Wiltshire,” said Cole. “I loved working in this historic facility and seeing how they’ve integrated the old brewhouse with their modern facility to maintain tradition, yet increase efficiency.”

Jason Oliver, brewer for Devils Backbone Brewing Co. in Virginia, visited Banks’s Beer in Wolverhampton to create Independence Ale. “This was a 4.8% ABV pale ale that would be tapped around the Fourth of July, so I decided to use both U.K. and U.S. hops to symbolize the shared history and special relationship between England and America,” noted Oliver. “I think it’s great for foreign brewers to experience English cask ale, and I always look forward to my first pint of real ale when I arrive in London.”

Along with talented American brewers, Wetherspoon also hosts beer artisans from a variety of other countries. Kelly Ryan, head brewer for Fork & Brewer in Wellington, New Zealand, journeyed last year to the long-established Batemans Brewery in Lincolnshire to showcase aromatic New Zealand hops in his Pacific Pearl Black IPA. Ryan recalls, “I officially brewed the beer that contained the most hops in the history of Batemans! It’s an honor to craft something that comes from your imagination and bring it to fruition on a large scale. The Wetherspoon collaborations make this possible.” 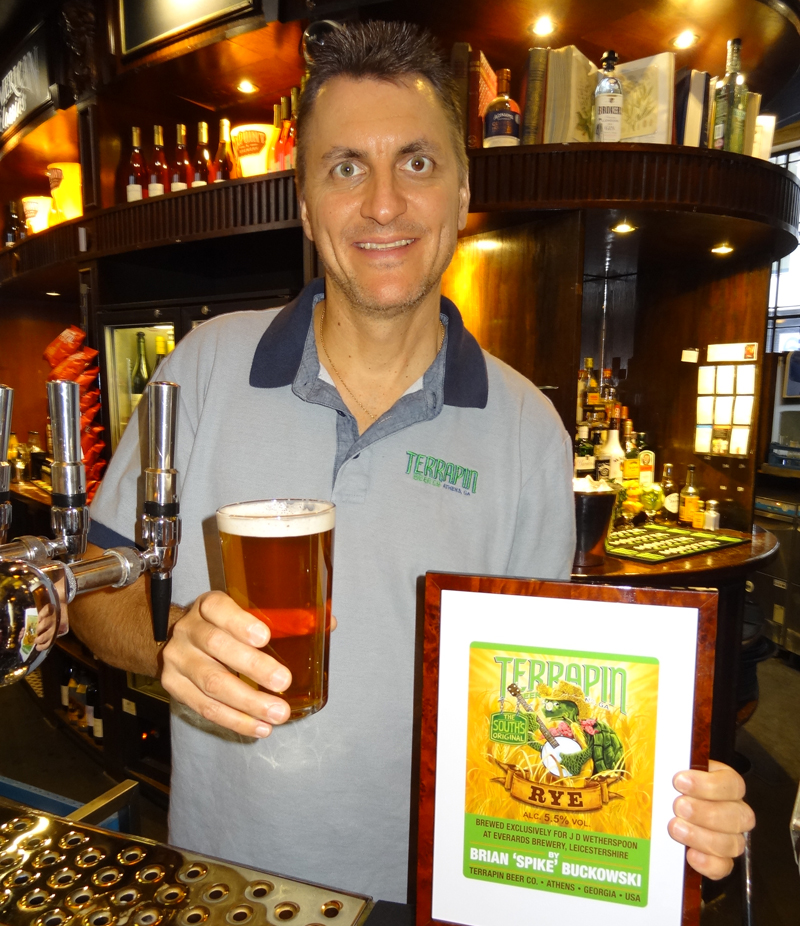 Terrapin’s Brian “Spike” Buckowski accepts a pint and a plaque in recognition of his contribution to the Rye Pale Ale clone for Wetherspoon. Photo by Owen Ogletree.
Owen Ogletree is a BJCP National Beer Judge, editor of Brewtopia.info and founder/director of the Atlanta Cask Ale Tasting and the Classic City Brew Fest in Athens, GA.

Posted by Brewtopia LLC at 1:45 PM 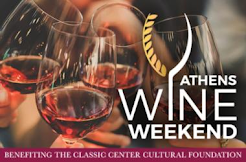