Delicious Casks & Winners at our 2017 ACAT


Look below for the full cask line-up, list of winners and photos from the event.
- Photos by Ale Sharpton & Phil Farrell - 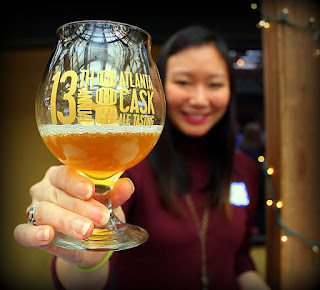 01. Arches Brewing Southern Bel' Belgian Ale - A 6.8% ABV golden ale with Belgian pilsner malt and added depth from biscuit and honey malts. Accentuated by fruity esters from the Belgian yeast, the vanilla, coconut and spiced character arises from the unusual wood species that this beer is aged over.

02. Black Diamond Mo-Rakinox - A West Coast influenced IPA with some of the newest experimental hops we could get our hands on. Mosaic and Equinox provide bright, juicy tropical flavors, while Rakau hops add pure "dank." 6.5% ABV.

03. Burnt Hickory King Zeke - A powerful version of our Ezekiel's Wheel, King Ezekiel is dry-hopped with a load of Amarillo in the cask and big enuff to rope a tiger and hold off any Savior. 6.5% ABV.

04. Cedar Creek Dankosaurus American IPA. The Motueka dry-hops in this awesome cask ramp up the tropical notes of Danko while providing an interesting lime and lemon character. 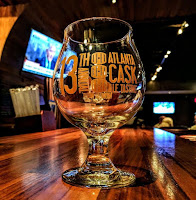 06. MAZURT The Dingo Drank My Stout Leatherwood Honey RIS - After babies, there isn't anything that tastes better to a dingo than a MAZURT Leatherwood RIS. This big, 13.6% ABV Russian imperial stout is heavenly infused with this tasty and rare honey found only on the remote island of Tasmania. Brewed with deep roasted, high-grade Kenyan coffee, Vermont grade-B maple syrup, Peruvian cocoa nibs, Madagascar vanilla and Leatherwood honey, this amazing stout is coveted by envious, sober, thirsty dingoes everywhere.

SECOND PLACE UK-STYLE: 08. Copper Creek Oatmeal Stout is a classic, fairly hoppy version of the style made with flaked oats for a silky body. Its inviting aromas and flavors are a mixture of roasty, chocolaty and malty tones.

THIRD PLACE CLASSIC STYLE: 10. Founders Red's Rye IPA. Noted for its distinct grapefruit characteristics and biting finish, this version takes it to a whole new level with the addition of Mosaic hops to the cask.

11. Harviestoun Old Engine Oil Engineers Reserve with Ghost Naga Chilies (UK - 9% ABV). After feedback from the USA suggested the ABV of our original Old Engine Oil (6%) was too low, we created this intensely flavored brew.

14. Moon River Cliffs of Insanity with Chipotles. This 8.5% ABV sneak peek of our new imperial stout was primed with dark brown sugar and cask-conditioned with dried chipotle peppers rehydrated with rum. 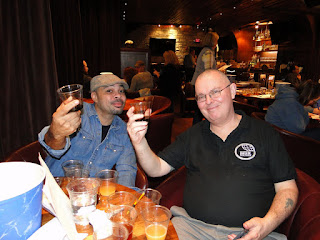 17. Red Brick Passion of the Bretts IPA - Our flagship Hoplanta IPA fermented with six complex strains of Brettanomyces, then conditioned in the cask with passion fruit.

20. Slice & Pint Cloud 9 Barleywine. Finally, after 12 years, we recreated the old Dogwood Brewing barleywine recipe - an English-style barleywine with loads of English malt. We aged this cask for a year on French oak.

22. Thomas Creek Class Five IPA - A big Galaxy dry-hop addition to our new recipe for Class Five makes for a citrusy and crisp American IPA brewed for the true hop-head.

23. Three Taverns Funk Yard - A mixed fermentation sour ale made with Belgian yeast and Lactobacillus, then aged in oak barrels with Brettanomyces, and dry-hopped in this special cask with Mosaic and Amarillo. 6% ABV. 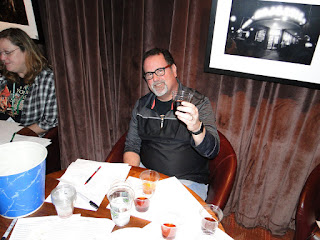 25. Urban Tree Ginger Zestanero Cider started with infusing our semi-dry cider with fresh ginger and habanero peppers. To make it even better, it was aged in a Nicaraguan rum barrel for nine months. And if that wasn't enough, we added several winter spices like cinnamon, anise and licorice - creating a unique festive cider. (Allergen Warning: spices were made in a facility that manufactures nuts.)

27. Abbey of the Holy Goats - Goats in the Garden. The goats got into the elderflower garden, so we decided to brew a dry and refreshing saison with elderflowers and traditional Belgian beer spices. 7.2% ABV.

SECOND PLACE CLASSIC STYLE: 28. BlueTarp All I Want for My Birthday is a Big Booty Baltic Porter - Unlike a stout, smooth dark chocolate dominates over subdued roast coffee notes. Sweetness reminiscent of balsamic vinegar (without the acidic bite) makes for a creamy, mid-winter beer with a deep burgundy blackness. 9.2% ABV, 42 IBUs. 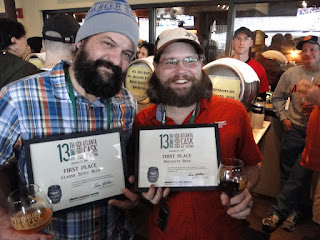 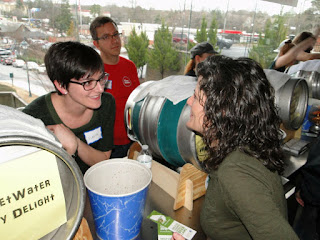 36. Jekyll Brewing Southern Juice IPA is brewed with wheat and oats for an intriguing malt profile backed up with huge additions of Citra and Simcoe hops. 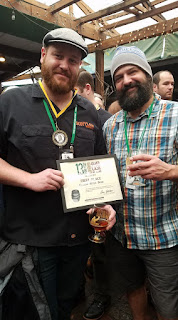 44. Second Self A Hopwork Orange - IPA dry-hopped with Mosaic, Huell Melon and Medusa hops in the cask, along with orange peel and fresh-squeezed Valencia orange juice.

47. SweetWater Raspberry Delight - A big, deep, black stout with strong coffee and chocolate notes balanced by the perfect hop profile. The kicker is the boatload of fresh Meeker raspberries from Oregon. 10% ABV, 69 IBUs. 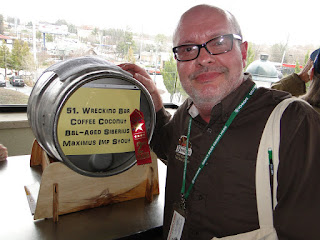 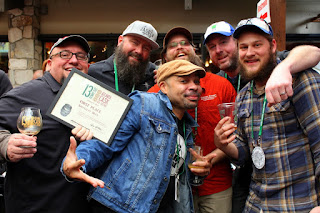 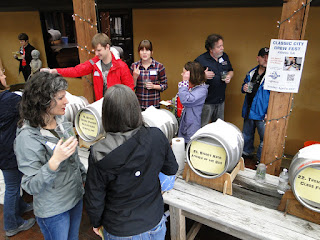 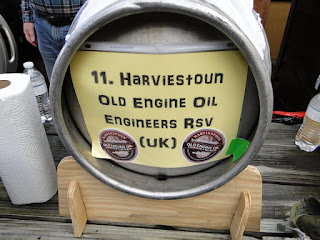 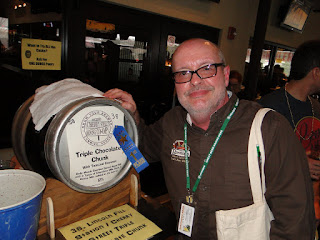 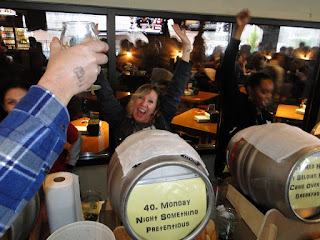 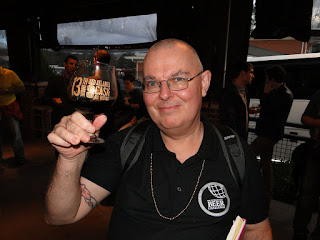 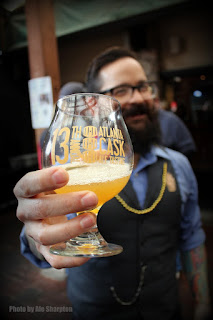 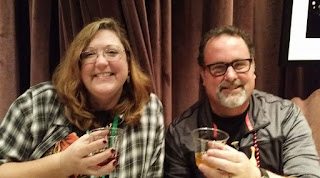 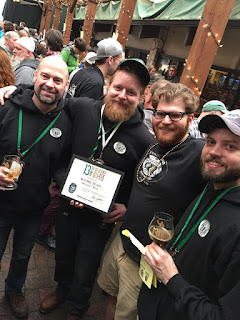 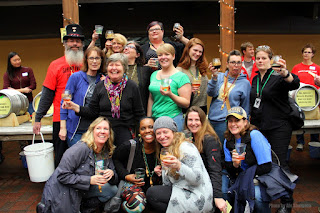 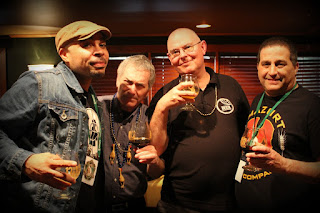 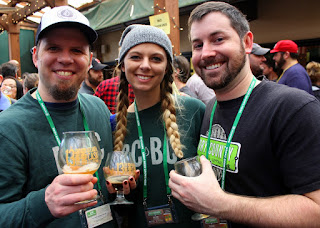 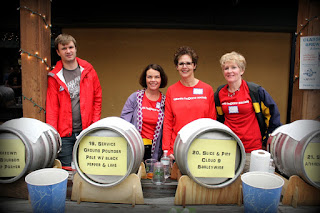 Look below for my interactive map and photos of many of the best places in Budapest to enjoy a craft beer or two.

Posted by Brewtopia LLC at 3:03 PM No comments: 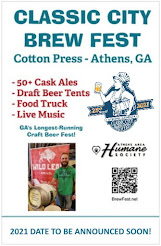